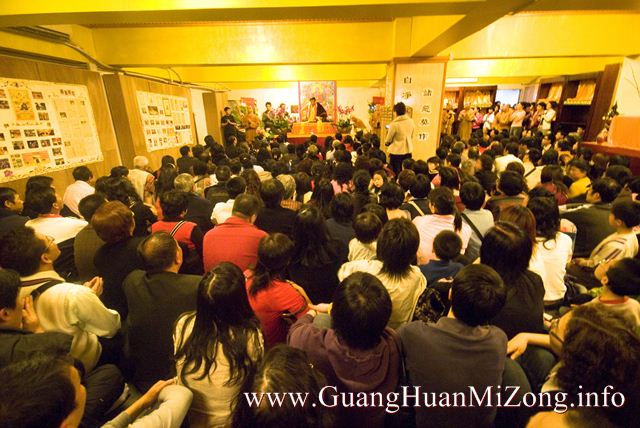 At the beginning of the Chinese New Year of 2009, in order to relieve beings of Six Realms from sufferings and afflictions, and reach the yonder shore of liberation, the honorable Holy Master Ziguang Shang Shi announced the almsgivings of “One Day Two Practices Three Chantings” Health Dharma to the public for the first time. On this day, Holy Master Ziguang Shang Shi was sitting on the altar of Mandala, emitting billions of rays of great light and looking with his compassion at the disciples, who were longing for the profound teachings from the Holy Master.

The Holy Master proclaimed solemnly, “In order to speed up the salvation of the earth and the people with affinity in the world, ‘One Day Two Practices Three Chantings’ Health Dharma will be opened to the world for free as an almsgiving!” At that instant, hundreds and thousands of subtle sounds were being made, and delicate flowers were raining. The Gospel that benefited all the sentient beings was being disseminated in the whole Dharma Realm; immeasurable Buddha Lands were quaking and immeasurable Buddhas, Bodhisattvas from all directions, Gods, Nagas and the eight Groups were all praising with great delight! All the disciples were extremely inspired when hearing this great announcement! They were filled with the greatest delight and deeply touched to tears. They all kneeled down and kowtowed with gratitude for the deep compassion of the World-honored One. This news caused great sensations to spread to each corner of the Eastern world.

[break] The First Almsgiving [break] In the Great Dharma Convention on February 7, 2009, in order to fulfill the need of the followers who longed for the Righteous Dharma and made devoted conversion, the great World-honored One Master Ziguang Shang Shi imparted the supreme “One Day Two Practices Three Chantings Health Dharma” as an almsgiving for the first time! The sky was crystal clear on that day, the Five Great Buddhas and Bodhisattva from Ten Directions blessed the destined land where the Eastern Temple of the God of Earth was located. The gate of the Temple was wide open to welcome the hundreds of predestined people from different places of the world. The great hall was crowded by these people who were eagerly waiting for Master Ziguang Shang Shi’s illumination. [break] When Master Ziguang Shang Shi appeared as if the sun brightened the Hall, he emitted immeasurable light that illuminated the entire world. The World-honored One instructed the followers who were from far away the practical dharma of the Nine-Tier Esoteric Dharma and told them about health and wealth, which they were most concerned about it. The most extraordinary remarks all showed wisdom and a sense of humor as well. All the exciting stories contained meaningful teachings of truth and inspired the devoted followers who came for the dharma! They applauded for the sound of Buddha, which they had never heard before! The Dharma of Guang Huan Mi Zong came from the Mahavairocana Buddha, and only the secret code given by the Master could communicate with the message to acquire the light and the energy. Just as what Master Ziguang Shang Shi told the people in the world, when practicing the dharma, they must do good deeds, and they must save themselves as there was no savior in the world. [break] One Day Two Practices Three Chantings Health Dharma [break] One Day Two Practices Three Chantings Health Dharma is imparted for free on a splendid red Dharma Felt by Master Ziguang Shang Shi; it is derived from the Nine-Tier Mahasandhi (Great Perfection) Supreme Dharma. It is the will of the Five Great Buddhas and the request of the Bodhisattvas from Ten directions. It is the path of hope heading towards life for the people, and helps them to benefit from Buddhist Dharma in a short period of time, to improve their health condition rapidly, and to explore their wisdom. It also let the people understand that they have the ability to save themselves if they practice the Dharma in the proper way. The most supreme part of this Dharma lies in its expeditious effect and practical cultivation without any differentiation of country, race, language, religion, politics, gender, or age! [break] From now on, thousands of Guang Huan Mi Zong Angels will undertake the majestic red Dharma Felt and convey One Day Two Practices Three Chantings Health Dharma in different places. With the sacred light by the Five Great Buddhas and the Bodhisattvas from Ten Directions, this practical Dharma that can relieve diseases and sufferings, dissipate evils, remove disasters and change fate, will facilitate the progress of world peace and human health, and spread to each corner of the world from the Palace of Kshitigarbha Bodhisattva. It is foreseeable that soon, millions of Red Felts will cover the Land! [break] By Cassandra [break]