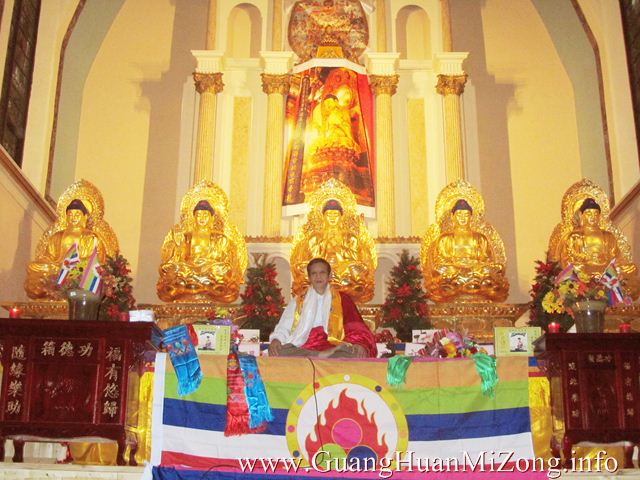 I was invited to my second Buddhist celebration on January 19th, 2011. This celebration was to honor the birth of a very important Buddha – Mahavairocana Buddha. He is called the Great Sun Buddha. Mahavairocana transforms into three thousand different Buddhas and gives Light to Three Thousand Galaxies.

The celebration was held at the Five World Buddhas Temple in Amsterdam, New York. We were graciously greeted at the door and led through the reception area into the main area where there appeared a long table filled with a variety of delectable food. The gathering began with interesting and lively conversation between the guests and Nuns. We were then blessed with the presence of Holy Ziguang Shang Shi, who welcomed us graciously. After the welcome we formed a procession line. Each one of us was given an offering to place on the altar of the Buddha. Some participants were given fruit to symbolize a fruitful life in their next incarnation. Some were given flowers to symbolize personal good looks and beauty in their next incarnation. We all proceeded upstairs to the sound of a distant drum and gave our offerings to the Holy Master.

Holy Ziguang Shang Shi indicated that: “The four words of “Guang Huan Mi Zong” were bestowed by this great Buddha. Thus Guang Huan Mi Zong appeared in this world, to spread the brightness to the hearts in need of care. We then were blessed by the Buddha during a meditation. 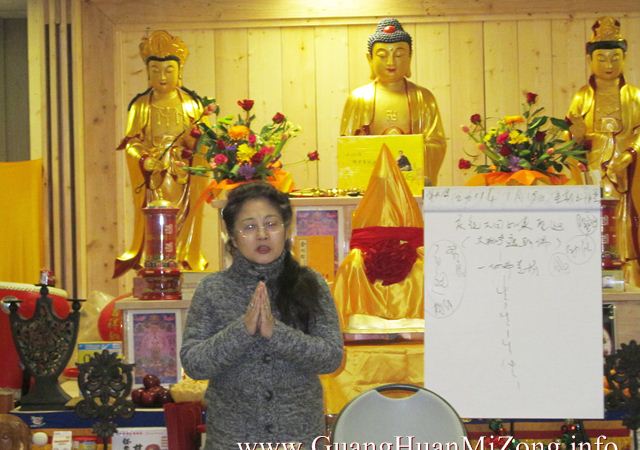 After the ceremony we again gathered downstairs at the long table. We shared our stories of the benefits obtained from practicing Guang Huan Mi Zong Health Dharma. Most stories were of miraculous healing. One woman told the story of having a thriving business but she was in such poor health that she could not enjoy her wealth. She had been confined to a wheel chair until she met the Holy Ziguang Shang Shi and received the Guang Huan Mi Zong Health Dharma. Now she is on her feet and able to walk and even walk up stairs. The overriding theme was, health is of paramount importance in life. Great wealth can be accumulated, but without good health money is of little value. Some of us were drawn initially out of curiosity but then felt strongly drawn to return. Such was my case. There was a feeling of Love, Peace, and belonging that I experienced the morning after my first exposure to the Guang Huan Mi Zong Health Dharma and the wonderful people of the World Peace and Health Organization. 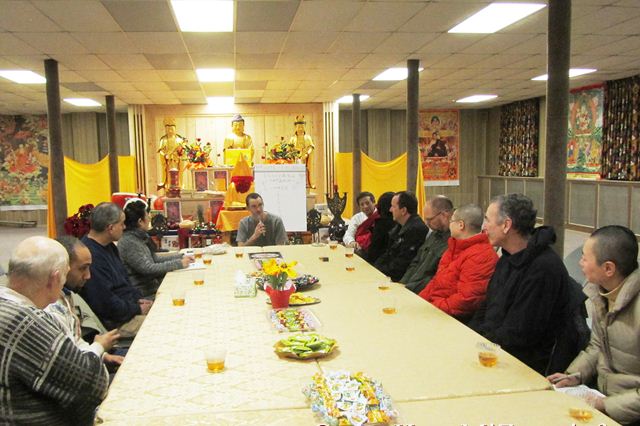 After our stories were heard, all took enjoyment in the delicious food that was served. Sandwiches and wonderfully flavorful salads were served. Traditional Chinese tea was enjoyed by all. And the sweets, that I love so much, were there for the taking. Holy Ziguang Shang Shi gave us many blessings during the meal along with so many smiles, pleasant conversation and laughter.

I left with my heart full of joy and a strong sense of belonging for these wonderfully genuine people who give of themselves selflessly in the pursuit of Health and Peace for all Sentient Beings on this planet. I am so proud and blessed to be in their company. 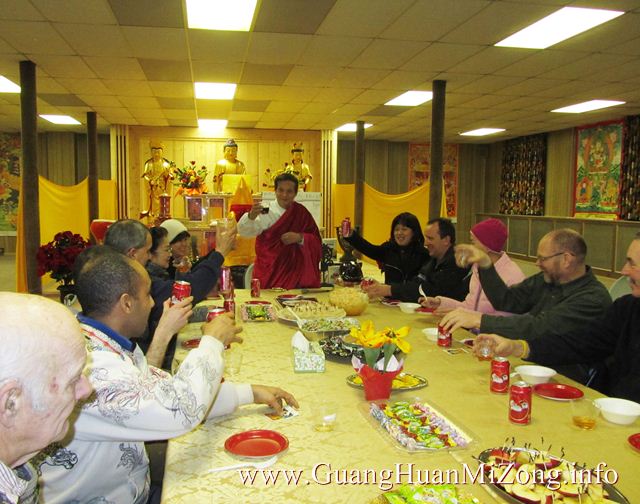 On January 11th, 2011, I was invited to a ceremony at the World Peace and Health Organization’s Buddhist Temple in Amsterdam New York. The celebration began with a delicious bowl of Chinese porridge known as La Ba. Each ingredient in La Ba is blessed, therefore it takes hours to prepare. La Ba is made with nuts, rice, millet and dried fruit to name a few. The Nuns who made the porridge toiled until 3 AM that morning. It was delicious and surprisingly sweet. When I commented on its sweetness with delight, Regina said, “It is sweet because life should be sweet and not bitter”. I couldn’t have agreed more.

The origin of the festival goes back to before Sakyamuni Buddha’s enlightenment. He practiced an ascetic life for six years and became very weak after only eating one grain of rice, or one nut or leaf per day. After collapsing in a river and nearly drowning and in a very emaciated condition, a village girl named Sujata offered him some milk rice porridge. He then decided to abandon the ascetic life that didn’t bring him enlightenment and harmed his body. He went to meditate under the Bodhi tree and eventually attained enlightenment on the eighth day of the twelfth lunar month. December 8th on the Chinese calendar corresponds with January 11th on our calendar. So La Ba Porridge is a symbol of offering to the Buddha and a commemoration of his enlightenment.

After several more participants arrived and enjoyed the La Ba, we moved to the former St. Michael’s church, now known as the Goddess of Mercy Temple. Soon after we arrived the festivities began with a speech from the Holy Master Ziguang Shang Shi: “As a prince, Sakyamuni Buddha renounced his throne, fame, wealth, and family, and went for the way of salvation. He attained his Enlightenment after six years’ ascetic life and started to preach birth, aging, sickness and death to his followers. For a human being, without a healthy body, it is useless even if one has a lot of money. The sublimity of the Buddha is to find out the Way for everyone. I hope everyone of you can control your own life and follow the Buddha’s Way.”

After the Holy Master delivered his speech, the program began. There was drumming with beautiful singing, chanting and storytelling by Buddhist monks and Nuns. The first performance is known as the Vajra Dance. Men appeared with frightening masks showing the power and force of the dharma protectors made individual movements and postures around the stage. Then there was a play with men carrying water with theme of “teamwork gets the job done”. Next was a traditional dance performed by smiling young women wearing the most beautiful traditional costumes. At one point in the presentation monks appeared with bamboo poles and did a vigorous chanting of Om Mani Padme Hum and then a demonstration of Tai Chi.

At the end of the performances the Holy Master Ziguang Shang Shi reappeared and held a blessing ceremony for those who died in 2010. He expressed gratitude for all who attended and hopes to continue with this type of cultural exchange in the future. Fruit and candy were passed out to those who attended followed with group pictures of the Holy Master, the Monks and Nuns and all who attended this wonderfully enjoyable ceremony. 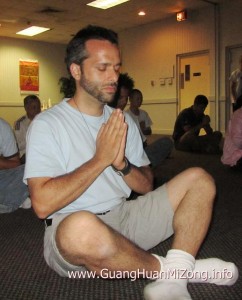 On December 26, 2010, my father and I embarked on a journey of connection in Amsterdam, New York to meet with a spiritual leader of the faith and healing arts. The teacher and architect, Ziguang Shang Shi, from China, has been revered to as a holy man with a quest to bring healing to those in need through his program. He is direct lineage to the teachings of Sakyamuni Buddha through the Dharma practice.

He has come to bring peace in his own accord, channeling his knowledge and upbringing. Like all beings that represent the greatness of God, Ziguang Shang Shi has demonstrated that awareness, harmony, belief, and the courage to drive HEALTH, are the key elements for real potential living. His traditions for teaching the Dharma are simple. Practice your awareness with you, those around you, and the world you live in.

In all, I have the highest praise and support for any leader who chooses to raise the standards of living. Master Ziguang Shang Shi is a leader for many tomorrows and friends who seek to receive a great foundation for a healthier way of life.