The seventh day of Zhong Yuan, the Ghost Festival in Chinese tradition, fell on September 6th, 2012, or July 21st of the Lunar Calendar. It was the last day that the doors of hell were open; the great Holy Master Ziguang Shang Shi, compassionately held a grand Dharma Convention for people to pray, eliminate misfortunes and to release souls from suffering. The ceremony was held at the majestic Five World Buddhas Temple at the Western Shrine. In this Ceremony, the Holy Master offered unprecedented almsgiving.

The soul-releasing ceremony began with the merciful Holy Master beating the sacred drum, for all ancestors of Buddhas, Bodhisattvas, Arhats, Great Achievers and people with great merit. This was to release their souls from suffering in hell, so as to enter the Pure Lands of the Buddha Worlds.

The thunderous drumbeat reverberated through space and boundless worlds, shocking the Three Thousand Galaxies. The Five World Buddhas and Bodhisattvas from Ten Directions were all present. They waited upon Holy Master with great respect and praised the Holy Master’s incredible merit. Hundreds of thousands of incarnations of the Goddess of Mercy flew through space to lead the dead to various Buddha Worlds.

The honorable Holy Master sat upright on the Nine-tier Mandala Altar; sparkling clouds of bright lights surrounded his body. He delivered the Buddhist teachings to people with affinity, and to immeasurable Buddhas, Bodhisattvas, Nagas and Guardians, and other beings. Then he disclosed the meaning of Seven Lives and Soul-releasing. The Holy Master taught the secrets of Soul-releasing and allowing the dead to rest in peace, and revealed the past-life foundation for achievements as well as the rules of heaven and the spiritual world, offering attendees inspiration and deep insight.

The Holy Master told the story how the Buddha helped the souls of his own mother and the mother of Venerable Maudgalyayana to be released from Hell. He claimed that supernatural power is unable to eliminate the karma of ancestors. Meanwhile, the Holy Master once again reminded people of the purpose of coming to this world, and demonstrated how to start a thriving career so that people could attain achievement.

Magical and Spectacular Scenes in the Soul-releasing Ceremony

In front of the statue of the Ksitigarbha Bodhisattva, the God of the Earth, eighteen preachers stood regally in two lines. The great and merciful Holy Master beat the drum and led preachers to chant the supreme soul-releasing Mantra sincerely, for the attendees’ parents for seven lives, generations of ancestors, karmic creditors, deceased friends and relatives, as well as the wandering souls killed in disasters and beings which are under severe torture in hell. Thus, they received a tremendous almsgiving.

When preachers chanted mantras, it seemed as if golden seed words flowed out from their mouths, echoing the drum beaten by the Holy Master. The great power and magical effects of the Soul-releasing Ceremony were shown. Hundreds and thousands of Ksitigarbha Bodhisattva’s emanations were spreading over the boundless hells, to enlighten and save beings, and to perform the great vow he made before the Buddha. Hell’s door gradually opened. It was gloomy and bottomless inside. The Holy Master’s sacred power was manifested when the gold and silver ingots, which were made by preachers as they chanted mantras, suddenly burnt into flames. 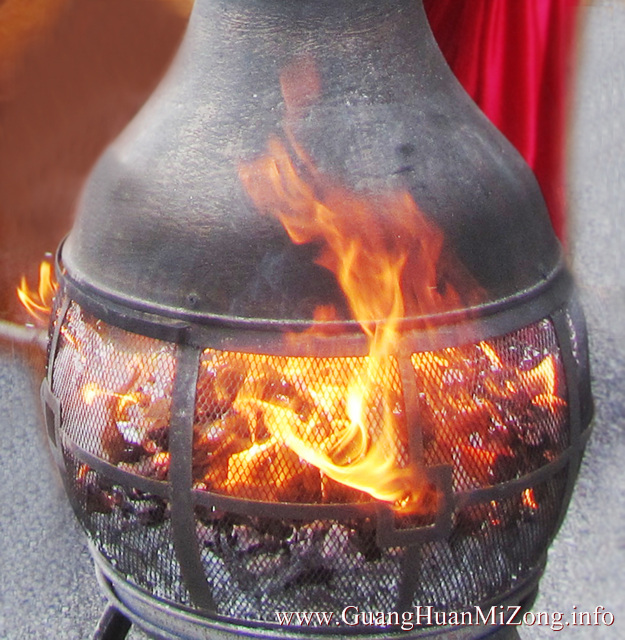 Countless tortured souls across the Space Realm all turned into tiny shining stars and flew back to hell. They obtained the precious chance for reincarnation. The ghosts who had long been suffering in hell were relieved from their penalties and expressed endless gratitude to the Holy Master.

Attendees heard the sorrowful cry of their ancestors, and saw that their ancestors were guided by Buddhas and Bodhisattvas. All those ancestors showed tearful thankfulness for the Holy Master. The dead souls of attendees’ ancestors of seven-lives sincerely made offerings to Ksitigarbha Bodhisattva with treasures which preachers chanted mantras over. Their karma was resolved immediately, in the Holy Master’s thunderous drumbeat and secret mantras. Causation of the past was changed. Those who had done some good deeds could go to heaven, and penalties for those with evil karma were reduced.

Donating Everything and the Manifestation of St. Mary

An American artist, Ina, attended Holy Master Ziguang Shang Shi’s health dharma class two years ago. Ever since then, she had various benefits. Being grateful to the benevolence of the Holy Master, after her sister’s death, she hired a lawyer to draft a will donating all her possessions to Guang Huan Mi Zong. She went to the Soul-releasing Ceremony and prayed for Holy Master’s help, wishing that her sister’s soul could go to heaven.

During the Soul-releasing Ceremony, Ina was sincere enough to connect with the message. She witnessed a magical scene. Surrounding by red light, St. Mary led her sister, who was a Catholic before death, to Heaven. Ina’s wish came true. She burst into tears with the deep love for her sister, and claimed once again that she would donate all her belongings to Guang Huan Mi Zong, including her house, her store and her business, to show her gratitude to Holy Master Ziguang Shang Shi.

In this last day of the Ghost Festival, the endless number of ghosts and wandering souls returned to where they should be. Those that should be in hell returned to hell; those that should be in heaven were led to heaven. With infinite thankfulness of the attendees, Buddhas and Bodhisattvas, deities, ghosts and other beings for Holy Master Ziguang Shang Shi, the grand Dharma Convention drew to an end.

Guang Huan Mi Zong has launched the “Healthier People Initiative” in order to improve people’s quality of life, in terms of physical, mental and spiritual health. The aim is to help those who are not healthy become healthy, and those who think they are healthy become even healthier.

Government spending on healthcare in the United States has been skyrocketing for decades, increasing by over 1000% in the last 30 years. And yet, despite the huge expenditures that are threatening to cripple government, businesses, and individuals, some in the medical profession have made the shocking prediction that the generation of Americans being born today will be the first in history to have a lower life expectancy and worse health than their parents.

Taking a look at our friends, family, coworkers, and fellow Americans, or for many of us, even a quick glance in the mirror, reveals a disheartening picture. A huge and growing proportion of the country is overweight, and suffering from the many complications that result, such as hypertension, and diabetes. Many others suffer from combinations of other diseases, such as asthma, allergies, migraines, and so on, that degrade the quality of their everyday lives.

Together with physical diseases, Americans are suffering from an epidemic of mental diseases. From depression, to bipolar disorder, schizophrenia, panic attacks, addiction and beyond, millions of Americans are tortured everyday by their own mind.

The pills, injections, and surgeries that are the results of trillions of dollars of medical research and spending can often provide only a superficial relief to the symptoms of illness, and cannot give patients a real cure.

It is not just individuals who are unhealthy, but the whole society is becoming increasingly strained, economic woes, political tensions, breakdown of traditional family and social ties, the increasing frequency of senseless acts of violence, and so on.

The natural world too is becoming increasingly unbalanced from pollution, depletion of natural resources, extinction of species, extreme weather and natural disasters.

Thankfully, there is hope.

The Guang Huan Mi Zong Health Dharma taught by Holy Master Ziguang Shang Shi is supreme in the world for its ability to relieve physical and mental illness, and promote excellent health, without great cost, or the use of chemical or surgical remedies.

Based on the practices of meditation and cultivation of spiritual energy perfected in India and China for thousands of years, Guang Huan Mi Zong Health Dharma is a shining light that can bring health, youth, and good fortune to the people of the world. It strikes at the root of illness, not just healing, but revealing the true causes of our diseases, and developing the virtue, compassion, and wisdom of practitioners.

Previously taught only in secret, in a world where esoteric knowledge had to be guarded to prevent misuse, Holy Ziguang Shang Shi has seen the suffering of the people of the world, and responded with a plan to introduce the profound benefits of Health Dharma worldwide. He has made the bold prediction that with adoption of his health initiative, the health care spending of a nation could be decreased by 60% or more, and the quality of life, and health of the nation could be improved dramatically.

We welcome any government or business leader who wants to make a change and is ready to take the first step toward realizing the dream of peace, health, and harmony for the world.