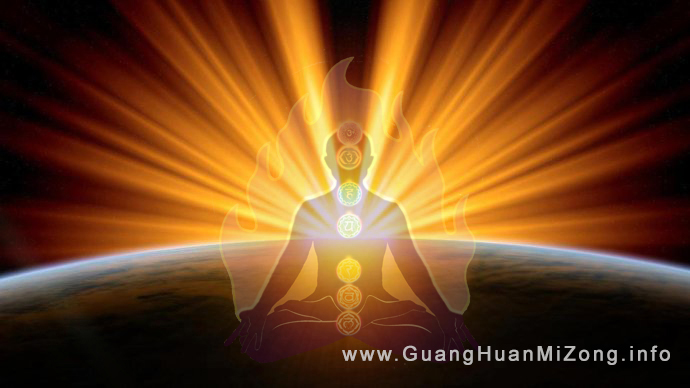 Leaving all projects behind, I arrived at the Holy Mountain Buddha Land to study the Dharma, and ultimately, received much more than I had expected.

In the 2014 Converted Disciple Retreat Class that I attended, 13 days had felt as if I had been in a time tunnel, without any concept of time passing by. I underwent many special experiences during my practice, especially the indescribable bliss of Dharma springing within my heart. I wrote down my summary to share with other practitioners, to help encourage them to be diligent with their own practice.

Day 2: After I entered my cave, I prostrated myself before the Buddha’s Illustration of Ten Dharma Realms. There was a Bodhisattva in a sitting posture, manifesting directly in front of me, emitting white light.

Day 3: I was practicing after Holy Master Ziguang Shang Shi taught us the Yin-Yang Mudra. I saw two balls of light which were continuously rolling, while one beam of white light and another red light appeared on each side of my body. Afterwards, I saw a large Buddha sitting above the world with numerous rainbow light emitting from his body.

Day 4: My heart was not well adjusted, so I did not experience anything.

Day 5: In the evening, I entered and exited Hell three times. There is indeed the door of Hell. Upon entering it, everything appeared upside down. The crying and screaming of the beings in Hell were horrific, like bone-chilling winds. I experienced the profound realization that it’s really not easy to be born in the world with a physical body. It is an occurrence that should not be taken for granted. It’s just as Holy Master said: “If one with a physical body does not cultivate towards enlightenment, it’s difficult to know which life one has to wait until he can be enlightened.”

Day 6: My first time of entering Samadhi. From head to toe, my entire body was covered and protected with a thick light. Despite both of my legs becoming initially numb from sitting, they soon became relaxed in a second. I then began to feel that my body no longer belonged to myself any more, and gradually just disappeared. I continued moving toward the origin, following the light, and soon after, had engaged in conversations with a certain Buddha. All of a sudden without any control, I burst into tears and the energy flushed into my body continuously. Each cell was filled with an electrical current. Eventually, I promised this Buddha one thing: the direction of my life.

Day 7: Abhisecana for Vajra Disciples. At the moment of Abhisecana, that is, an energy empowerment, powerful golden light-like lightning, was pouring into my crown chakra from the Space Realm. A golden light Buddha appeared after a few seconds. When we disciples were making vows with our eyes closed, I saw balls of light shining in red and white within my palms, and they floated upwards into the space. How wonderful the Guang Huan Mi Zong Dharma is! The vows we had made were being registered in the Dharma Realm.

Day 8: Holy Master Ziguang Shang Shi imparted to us the Seven-word Mantra. I saw an enormous powerful purple light penetrate a purple white body, as if through a channel. Energy kept on pouring into my body even after we stopped our cultivation. I discovered that after the Vajra Disciples’ Abhisecana, whenever Holy Master was giving his speech, the energy would be flowing to me once I made the Mudra. I would feel heat all over my entire body with both of my hands sweating profusely. Therefore, my pants would be drenched in perspiration after the class or after my practice. Other practitioners had also witnessed this.

Day 9: I had developed a very good state of practice, and didn’t want to stop when I was meditating with the Mantra. I soon discovered after the Vajra Disciples Abhisecana, the energy level had doubled, tripled, or increased four to five times, no matter which Dharma I practiced. If the energy I experienced in the past could be compared to a flashlight, now it can be said the energy was as powerful as lightning.

Day 10: Holy Master Ziguang Shang Shi compassionately imparted to us the Dharma of Seven Chakras. I vaguely saw my central energy channel, like a column of white light. I was completely amazed by the wondrous Guang Huan Mi Zong Esoteric Dharma. Afterwards, I saw golden light appear all over near Holy Master Ziguang Shang Shi and two golden energy bodies directly next to Him. When I tried to concentrate while focusing my attention at Holy Master, I witnessed His appearance changing, with an image standing out from behind the wall, beyond our three-dimensional world.

Day 11: When I was meditating in the Buddha Hall, I saw a golden light body appear above the Western Shrine. I thought it was Guan Yin Bodhisattva, but afterwards with a closer look, it was Saint Mary. Saint Mary was standing with her palms open downward. Golden and rainbow light were emitting from her head and body towards me, and I felt the burning heat all over my body. Now I understand the profound meaning of religious harmony expounded by Holy Master.

Day 12: I saw the future outlook of the Western Shrine. There were many monks, and a golden Buddha statue, in Thai style, situated towards the front of the Shrine. There was a fountain located near the rear section. The exterior of the Shrine was a fusion of a new era church and temple, with white walls, magnificent in appearance.

Day 13: Holy Master told us that we had not completely digested the Dharmas we learned in the Disciple class. I was shocked, and could not imagine how it would be after they are fully digested. Guang Huan Mi Zong Dharma is so profound, as deep and mysterious as the ocean, let alone the Dharma beyond the Three Vehicles.

(The author is a young film director from Hong Kong. He had been a Christian during his earlier years, and became very interested in Buddhist teachings later on. He met Holy Master Ziguang Shang Shi in 2011 and became a Converted Student. In this article he shares his Samadhi experience in the Converted Disciple Class he attended this year.)

On May 6, 2014, a spectacular Buddha’s birthday celebration was hold in two temples of Holy Mountain Buddha Land. The visitors joined the Bathing Buddha ceremony in the Goddess of Mercy Temple, and then followed the auspicious Dragon Dance to the Five World Buddhas Temple, for enjoying the Buddhist cultural performances.
[break] 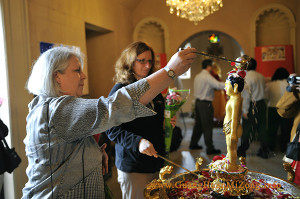 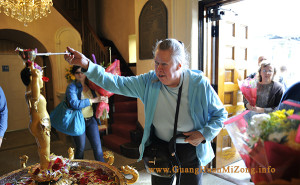 Bathed the Buddha with a sincere heart for purifying oneself
[break] 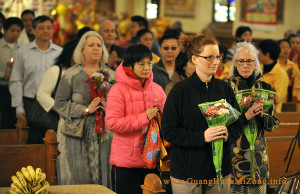 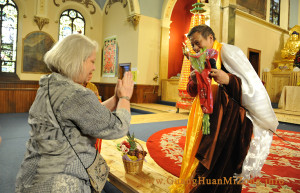