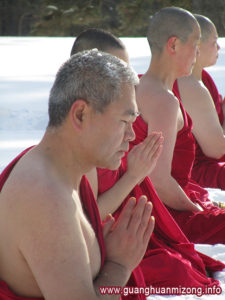 At a time when the flu is widely spread across the nation, there’s a Buddhist group located in New York using an ancient, mysterious practice to “burn away” the virus which affected some of their members.

Holy Master Ziguang Shang Shi, the founder of the group, mastered this practice and used it to help his followers relieve their flu symptoms and prevent the further spread of the virus. The Holy Master said that through Esoteric Dharma cultivation, the energy and power of the human body can be greatly increased, and thus diseases can be prevented and cured.

“Inner Fire Practice” (also called “Tummo” in Tibetan), is derived from Guang Huan Mi Zong Nine Vehicle Great Perfection Esoteric Dharma. How does the practice work? The theory behind it is profound and deep. In brief, it is to light the spiritual fire inside a human body to eliminate bad energy. However, according to most Buddhist researchers in China, it is hard to find true instruction from an authentic master nowadays.

On January 11, 2013, Holy Master taught the first level of secret Inner Fire Practice to his students. They immediately felt enormous heat inside their bodies once Holy Master taught them the special hand gesture, which is said to be a way to summon holy fire. A practitioner said, the heat dramatically increased when Holy Master started to chant his secret mantra. Most of the attendees shared the joy how their sickness from recent wide spreading epidemic was cured or greatly relieved.

According to the Centers for Disease Control and Prevention, the virus could still make a comeback in the final weeks of the season. When facing the “the worst flu in a decade”, according to ABC News, people might consider using traditional flu vaccines, drugs, or other health supplements to prevent the flu. This mystical practice from Holy Master Ziguang Shang Shi is a new hope for those who prefer to boost their immunity in a natural and holistic way.